Hi, y’all! If you are terribly unobservant, you didn’t notice that I’m doing the #BlogBattle again. But since you aren’t, I won’t mention it (shh).

Maybe it’s getting monotonous seeing battle after battle on here, with no posts in between… I need to find something else to do, as well, but for now, another blogbattle post awaits! This week’s was difficult. In fact, I didn’t even start writing it until Saturday, so it’s probably not very good. HOWEVER. I had to write it, because I made the picture for the post, and I loved it, so I couldn’t let it go to waste. xP

An eagle’s wings are his pride. Not only that, they are, generally speaking, the way he can escape from danger.

Derek had learned long ago that this was not true for an eagle in captivity. He could try all he could to escape, but his wings weren’t of much use to him in this state.

The wolf—Netra— was staring at him as if she expected him to fly her out of here, or fight to the death. Apparently she didn’t understand much about the menagerie.

Derek averted his gaze, and Netra grabbed his arm, with an expression that said, “you’re not backing out now.”

Hazel was standing nearby, with a cocked head and a worried expression.

Derek could barely believe that the child had stood up to the Keeper. Especially after what had happened with Arthur.

Shaking his head, Derek pulled away from Netra. “Come on,” he said, “I’ll show you what’s keeping us in.”

He folded his wings back and headed toward the trees.

Unbelievably, his spirits lifted as he walked. Maybe it was the scent of the fresh grass, or the way the trees danced in the slight breeze. He could almost, if he tried, think he was free.

After a few minutes, he realized that Hazel was following them.

He turned back, raising his eyebrows. “What are you doing?”

Hazel flashed her easy smile. “Following you. You’re going to try and get out, aren’t you?”

Derek hesitated. Netra seemed to think so. There were a few others they might meet in the woods who might join, though most of them knew how impossible it was.

He shrugged, gesturing toward Netra wordlessly, and started to turn away.

Hazel shifted into her reptilian form, sitting up with her ears perked. “I’m in.”

Hazel snorted a puff of smoke. “We can try. Keeper won’t know unless we succeed, right?”

He hadn’t thought of that.

Shaking his head and trying to ignore the wry smile creeping into his expression, he turned and continued. Netra followed along like an obedient dog, but every ounce of her being was focused, in a smooth way. What was she, an aristocratic hunter?

Maybe. Who knew where she came from, since she couldn’t tell him.

Pausing just under the shade of the trees, he glanced back. Well. She could, but not without a bit of effort from him.

Derek shook his head and gestured forward. “There we go.”

Netra moved forward, pushing dark hair out of equally dark eyes, and squinted up at the wall.

Derek knew what she was seeing, even though he didn’t look. It was a tall but broken down wall, sagging as if it had been abandoned.

Derelict. The word entered his mind and immediately made him cringe. It was what the Keeper had called him when they first met. “Aren’t you a little derelict, eagle?”

He shook his head, shaking off the memory, and met Netra’s skeptical gaze. She gestured over his shoulder.

Derek folded his wings closer behind him, taking a deep breath.

Hazel stepped forward, no doubt to explain, but Derek waved her off with one hand. She didn’t look happy, but she obeyed.

A moment passed in silence, and then Derek spread one wing, running his fingers along the feathers at the edge.

Netra’s whole body tensed, as if she was suddenly angry. She met his gaze, eyes burning brighter than Hazel’s fire.

“It’s not permanent.” Derek said. “Only the feathers are cut, not the actual wing, but the Keeper does it regularly. If he only didn’t do it for a few months…” He trailed off, giving her a sad smile. Maybe she saw now that they couldn’t get out.

Spinning on her heel, she marched toward the wall, reaching to climb on the uneven stone.

His breath catching in his throat, he let a moment pass. Maybe…?

Then he grabbed her wrist, pulling her back. “Don’t touch it.” He said softly. “It’ll burn—”

She glared at him.

What? He had just saved her from pain worse than the Keeper’s drain. Why was she mad?

Netra jerked her hand away, growling, and reached for the wall.

An instant before she touched it, there was a spark, and she was thrown backward, crashing against the ground.

She instantly curled into a fetal position.

Hazel reached her before Derek did, grabbing her unburned hand. “Netra!”

Derek crouched beside her. “She’ll be fine,” he murmured, “in a little while.”

Netra found her breath and pulled in a ragged gasp, hugging her hand to her chest.

Derek pushed Hazel’s hand away from Netra. “Leave her alone for a moment.”

After a second, Netra pushed herself up into a sitting position. Black dirt stuck to her clothes.

She looked at him, jaw set and tears gathering in her eyes.

He took a deep breath, standing, and held out a hand to help her to her feet. She hesitated, then took it, tossing her short hair out of her face as she stood.

She uncurled her fist, examining the burn, then looked up at him, eyes widening.

Hazel swished her tail through the grass. “You know what?”

She shifted to girl form, standing on her tiptoes to peer at the instant scar on Netra’s palm.

Her gaze darted to Derek’s own scar, which curled up his arm quite unlike the flat scar Netra now had, but somehow the same.

They probably thought he had tried to escape through the wall.

“Let’s get back to the menagerie.” Derek said, turning away.

Netra didn’t follow, but instead shifted and crouched, staring intently at the wall.

Derek growled under his breath, feeling more like an animal than ever. “Netra, you’re going to kill yourself if you jump at that. You can’t get through it.”

She glared at him, challenging him. He slowly inched in on her thoughts. “How does he know?” Her thoughts challenged.

Derek glanced at Hazel, who was giving the wall a distrustful, mildly frightened look. Derek did not want her looking at him like that, but Netra needed to know, or she might just try jumping.

Derek focused, entering her thoughts again, and projected his own.

(As a side note, check out Katie Grace’s blog! She’s doing a giveaway for her blog anniversary! 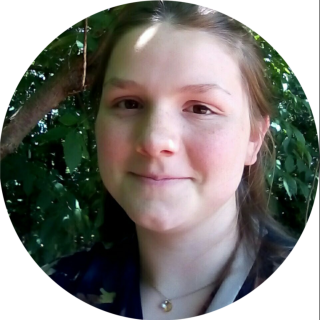 Carrie-Anne is a teenage girl with a passion for GOD, stories, and coffee. She hails from a land where clear stars dance with the wind above the treetops, and rocky roads stretch beyond the horizon with the call of adventures yet to be had. Carrie-Anne sees the stories, and she has an itchy pen to write them (but mostly in three months of the year...). When she doesn't write the tales, she draws them, in what she calls semi-realism pencil art. And with all that, she still manages to add a flavor of sarcasm to the world. Because, you know, there isn't enough of that already.